VFCU Donates Over 600 lbs. of Food to NJ Food Banks 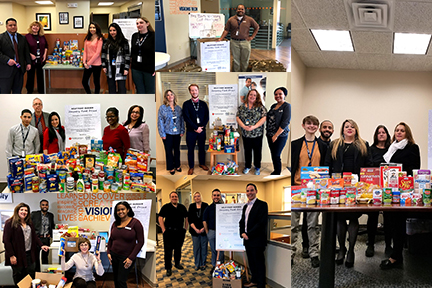 ENDICOTT, N.Y. - During the month of January, Visions Federal Credit Union invited members and employees to bring in non-perishable food items to be donated to four food pantries across the state of New Jersey. In total, over 600 lbs. of food items were donated to Center for Food Action in Englewood and Saddle Brook, Interfaith Food Pantry in Morris Plains, and Sussex Division of Social Services in Newton.

The food drive was held during January, post-holiday season to raise awareness for the growing issue of hunger that exists all year. "Hunger is an issue all year, but many people only think to donate around the holidays, but our neighbors are in need every day," explains Mandy DeHate, AVP Marketing at Visions.

Visions Federal Credit Union is a nonprofit financial institution completely owned by its members. Celebrating its 50th anniversary in 2016, Visions serves more than 190,000 members with 47 offices in communities throughout New Jersey, New York, and Pennsylvania. Services include banking as well as auto, home, personal, and business loans. Visit www.visionsfcu.org for more information.