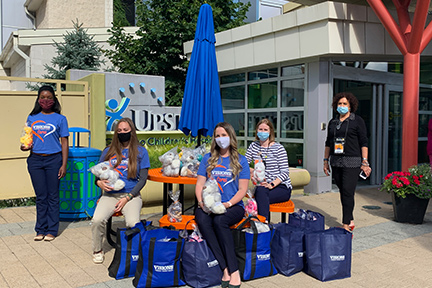 Visions’ employees volunteered their time to make the delivery and meet with the staff at Golisano.

“We are so grateful for the partnership with Visions FCU. This is one more way they are helping within our community. With COVID-19 restrictions we have had to suspend many activities so, the children will enjoy receiving the gifts to brighten their day,” said Toni Gary, Assistant Vice President Community Relations & Development for Upstate Golisano Children’s Hospital.

Kindness Projects are a way for Visions to give back and say thanks to the communities they are part of. They are committed to making a difference and putting a smile on the faces of all community partners in their various markets.

“Anytime we can implement one of our teammate’s ideas and support an impactful organization, it’s a win-win. We are proud to have partnered with Golisano Children’s Hospital and help brighten the day for the families they serve,” said Tim Strong, Community Development Manager at Visions.

Visions is proud of their effort within the Syracuse community and look forward to more giveback opportunities.