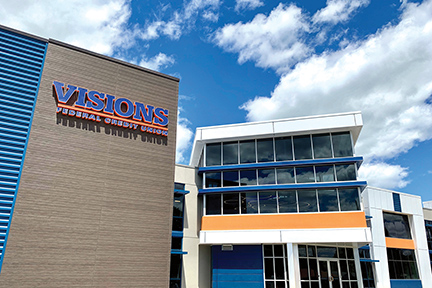 What was once the Endwell Elementary School, the newly remodeled location now boasts over 170,000 square feet of space. Features include plenty of parking, a full fitness center, several collaboration spaces, and a soon-to-be-opened cafeteria space for employees.

President and CEO, Ty Muse, says the expansion was necessary. “When we originally took over the school, we had about 68,000 members and 250 employees total. Today, we’ve got well over 650 employees and we serve more than 200,000 people. We simply outgrew our home.”

For Visions, it was important to stay in the area. “We knew we had to stay here in our hometown, that was without question,” Muse continued. “Our community has really made us who we are today, and this helps our employees stay local, too.”

As far as Muse and Visions are concerned, adding employees to support its members’ needs was possibly the biggest factor in making the decision to expand. Since construction began, Visions has added 50 new, local jobs, with plans to add another 150 over the next ten years.

In addition to its growing office space, the new location also features a walk-up ATM, expanded member parking, an interactive display, and space for members to make appointments for mortgages, business loans, trust and estate services, and to speak with investment professionals.

“Our branches are perfect for making withdrawals and applying for loans, but when it comes to long-term financial planning, we wanted to create a space at our headquarters where members could come in, feel comfortable, and take their time,” said Ty Muse. “We’ve increased our meeting spaces several-fold, and that will help us build the relationships our members deserve.”

About Visions
Visions Federal Credit Union is a nonprofit financial institution completely owned by its members. Established in 1966, Visions proudly serves over 200,000 members in communities throughout New Jersey, New York, and Pennsylvania. Services include banking as well as auto, home, personal, and business loans. Visit www.visionsfcu.org for more information.