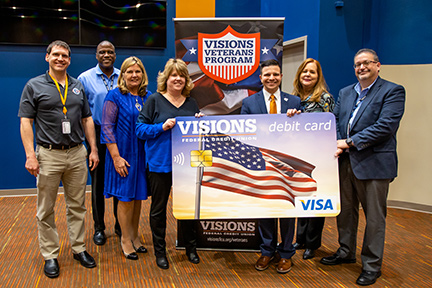 The check donation was the culmination of the first year of Visions’ Veterans Program, designed to help veterans and their families throughout the organization’s three-state footprint.

“Veterans are the cornerstone of our communities,” said Muse at the presentation. “They give and continue to give so much to the places we call home, and it only felt right to give something back to them.”

Visions’ Veterans Program offers a variety of bonuses for veterans and their spouses, a waiver of minimum balance fees for their Flex Checking Plus account, and a unique scholarship opportunity for veterans’ children and dependents. The focus of the check presentation, however, was tied to Visions’ new Americana debit card.

For each new, patriotic-themed debit card ordered by its members, Visions donated $5 to Operation Homefront. Since November 11, 2018, the start of the Veterans Program, Visions members ordered 5,027 Americana debit cards, resulting in the day’s donation.

“I just want to thank Visions for this donation and their commitment to the health and wellbeing of our veteran community,” said Stinson. “Many of our veterans come home and need assistance, oftentimes financially. This donation will help us build new housing and give back to those who gave so much.”

About Operation Homefront
Operation Homefront is a national 501(c)(3) nonprofit whose mission is to build strong, stable, and secure military families so they can thrive — not simply struggle to get by — in the communities they have worked so hard to protect. For over fifteen years, they have provided programs that offer: RELIEF (through Critical Financial Assistance and transitional housing programs), RESILIENCY (through permanent housing and caregiver support services) and RECURRING FAMILY SUPPORT programs and services throughout the year that help military families overcome the short-term bumps in the road so they don’t become long-term chronic problems. Operation Homefront has consistently earned high ratings from leading charity rating services, including Charity Navigator, which gave OH 4 Stars for 11 consecutive years for superior service and accountability. At Operation Homefront, 92 percent of expenditures go directly toward delivering programs and services to the military families who need it most.