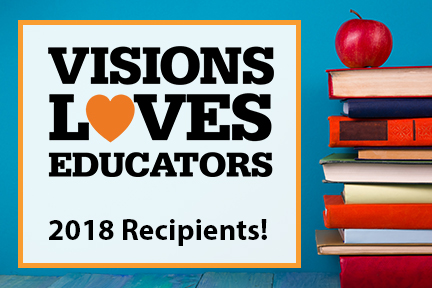 ENDICOTT, N.Y. – Visions Federal Credit Union is dedicated to giving back to the communities in which they serve. One small way that Visions FCU contributes to the lives of educators is through the Visions Loves Educators program. This year, VLE awarded $15,000 to fund classroom projects in schools across New York, New Jersey and Pennsylvania.

Educators are often faced with the financial strain of paying for classroom expenses out of pocket, with an estimated expense of about $450 for school supplies each year. Visions Loves Educators aims to assist these dedicated professionals by alleviating some of the financial burden.

Visions Federal Credit Union is a nonprofit financial institution completely owned by its members. Dedicated to giving back for over 50 years, Visions serves more than 192,000 members with 47 offices in communities throughout New Jersey, New York, and Pennsylvania. Services include banking as well as auto, home, personal, and business loans.